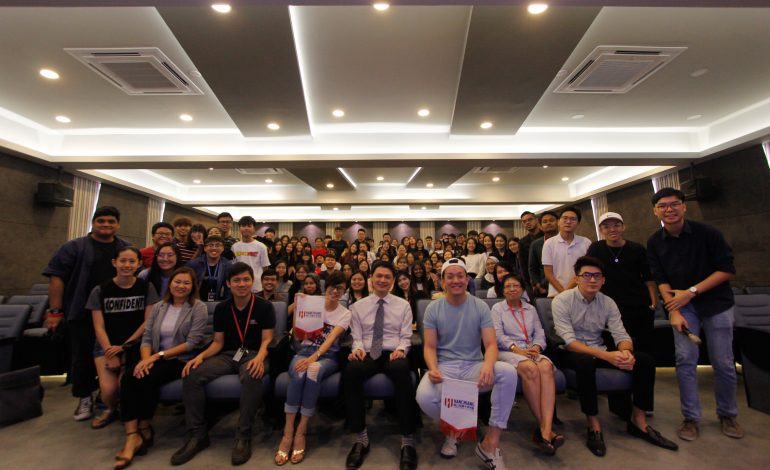 RTM TV1 news anchor Ivan Toh today narrated a personal experience behind his rise to fame within the realm of media. Sharing this, he hoped to inspire the youngsters of today to chase their passions and never give up.

In a world where there are too many different forms of  media, Toh told us what he did to stand out among the rest.

In a sharing session with Han Chiang University College of Communication (HCUC) students with him and Miss Tan Ley Teng from 8TV, Toh said how he endured to reach where he is today.

Responding to a question from the audience, Toh said it was not his first choice to have a successful career in the field of news-casting.

He said he had sent hundreds of resumes to different production companies because he wanted to be a movie director. But he was not able to achieve this dream.

“I attended an audition for the role of a host for RTM morning talk show, ‘Selamat Pagi Malaysia’. But I was outrightly rejected because I was labelled as a kampung face.’’

He was greatly disappointed with the incident.

Not willing to give up and considering the fact that he was already at RTM for the audition at that time,  he then went for another audition at RTM’s news department. He passed his resume to them and was accepted as a news anchor.

Later, in an interview with HCUC news centre, Toh said that the younger generation should handle failures and be good at multitasking in order to compete in the world of modern media such as Youtube and social media.

He said that one must be ready to forsake time with family and friends because becoming a media personality is “a very demanding job.”

Miss Tan Ley Teng, who is a HCUC alumna and Ambassador said because of the era of globalisation, people have access to any media at any time, so everyone can tell his or her story.

In this Digital Age, because of easy access to media, a small matter can be magnified.

She said as media comes in different mediums, different rules apply, for example, the role of a newscaster and a Youtuber is different, especially during speech delivery, considering that one is formal and the other is informal.

Toh, Tan and Owen Yap from 8TV are the judges for HCUC’s Host Idols Search Contest Finals to be held at Gurney Plaza on Saturday from 12pm to 5pm.