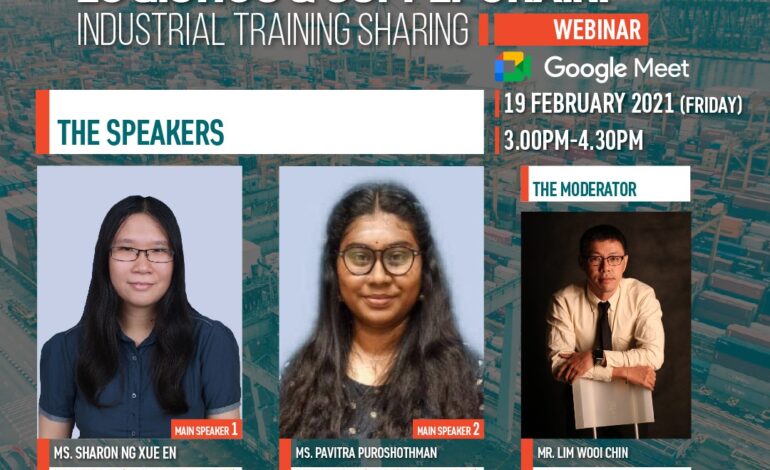 Han Chiang University College of Communication’s (HCUC) Education Counsellor together with the School of Business and Management (SoBM) organized a webinar entitled Professional Practices in Logistics & Supply Chain: Industrial Training Sharing on February 19th which welcomed two alumni of year-2020 to share their experiences as an intern. 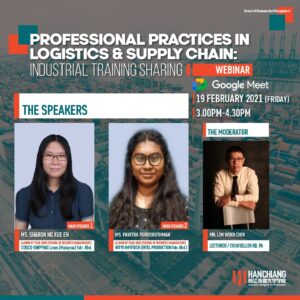 The two alumni, who were also the main speakers for the webinar, were Sharon Ng Xue En and Pavitra Puroshothman. Accompanying them as a moderator was Lim Wooi Chin, a lecturer and counsellor in HCUC.

To begin with, both the speakers underwent their industrial training which had lasted from 1st of September to 18th of December 2020. Sharon had her internship in one of the world’s largest container shipping companies called COSCO Shipping Lines Co., Ltd (COCSO).

Sharon explained how she came across COSCO SHIPPING Lines from the list that had been provided by the university college recommendations to students for carrying out their industrial training. At first, she sent her résumé to most of the companies from the list of suggestions. Yet, in spite of her initiative many of the companies were reluctant to welcome her as an intern due to Covid-19. Therefore, she did not receive an immediate reply until she contacted the person in charge from COSCO. 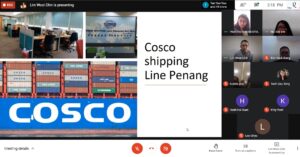 Aiding the shipment process was all part of Sharon’s responsibility as an intern.

“At the beginning of my internship, I was instructed to listen to phone calls which I had a hard time replying to when they call to ask things related to their bookings or shipment as I have not familiarized myself with the process and my superiors. Hence, I was obliged to hand over the call to my colleagues and let them answer. But, after I had learned about the processes I could easily handle the customers,” said Sharon.

One of many worries that students have before embarking on actual fieldwork, is whether they can put the theories they have learnt in school into practice. To this Sharon gave an example about the ins and outs of logistics which she had learnt in the classes like Original Bill of Lading, Commercial Invoice, Letter of Authorization, Letter of Intent and Packing List where all of the named documents would have been imprinted in the students’ memory by the time they go out to work.

In this time of a pandemic, many bookings were canceled. Without a customer service department in the Penang branch, Sharon recalled how she had to redirect the calls to the office in Kuala Lumpur.

When first interviewed by COSCO, they had asked Sharon about her past working experiences. She informed them of her previous internship as an admin assistant before she continued her bachelor degree. 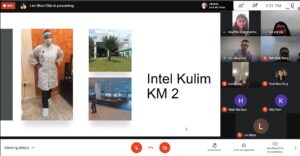 Pavitra shared her daily routine when working in a tech company.

On the other hand, Pavitra had worked under Intel Corporation, an American manufacturer of semiconductor computer circuits, but reporting under Nityo Infotech.

“Intel company produces processors, server products, ethernet products, memory and storage, and also chip sets. The company has given certain departments to the vendors. So, Intel has assigned the shipping and receiving, and logistics department to the vendor. Therefore, Nityo Infotech is one of the vendors that is supplying workers to the Intel company which helps minimize cost on recruitment,” said Pavitra.

Pavitra had sent numerous emails to many companies regarding her internship application but did not receive any formal replies. After having told one of her family’s friends that she had to undergo her industrial training, she quickly found herself being recommended to one of Intel company’s managers. Not long after, she discovered Nityo Infotech and personally contacted the company.

“In Intel I was placed in IMR which stands for Inter Module Repair department. Daily, we will receive the bots from other Intel companies, such as from Israel, Costa Rica, China, Vietnam, and so on, to repair the damaged bots. We have to receive the bots manually, and also in the system,” continued Pavitra.

After the repair has been made all that is left is to ship it back to the customers. This includes preparing shipping manuals for the customers, added Pavitra.

In order to avoid exposure to dust particles in the factory, workers wear bunny suits, booties, and face masks, and reported to the moderator, as he used to work in Intel corporation.

“Once, I incorrectly made an invoice for a customer. So, I had to directly deal with the   Custom officer to explain what actually happened,” said Pavitra. It is rather rare for an intern to deal directly with the Customs according to Lim. “My supervisor told me that it would be a great experience if I deal with the Customs myself,” replied Pavitra.

“Last year, as the cases kept on increasing, the government announced Enhanced Movement Control Order (EMCO) in the area where I resided. So, I could not go to work for two weeks. And, I could not even do my work from home. For that reason I had to extend my internship period to an additional two weeks, and finished by the 31st of December,” added Pavitra.

Pavitra was asked about her final-year project, what she expected to gain from the company, and various other things when she was interviewed for more than an hour.

All in all, Pavitra and Sharon were both glad to have received assistance from knowledgeable colleagues.

Towards the end of the webinar, Lim had asked both of the speakers if there were any tips or advice that they had in mind for the participants.

“Firstly, when working in any company, no one would be as ready to teach you as each of them already has their own job. So, instead you need to take the initiative to ask others whether they require any assistance at the same time and ask if they could teach you. Don’t be shy to ask as you will never learn without asking,” said Sharon.

“Next, if any of you want to work in the shipping line, you’d better prepare for a less frequent time to go out. Because, when the vessels arrive at the port, with so many things to do you will need to work overtime. And, sometimes you will have to work on weekends as the vessel’s arrival could never be confirmed since you can only estimate,” said Sharon.

“Be punctual. Do not be late for work or late submitting the tasks given to you. Because, it will not give a nice impression on you. Secondly, do not limit yourself. Learn as much as you can. Because, as since we have finished with our degree, and while we’re applying for a job, the interviewers will definitely ask about our working experiences. So, as we all are fresh graduates we might not have previous working experience. That way we will have the chance to tell them about our internship experience. “One more thing, don’t forget about your final year project as there’s a chance you might be asked about it,” advised Pavitra.

As to the question from a participant, Melvin Leong, on whether or not a diploma would suffice in getting a job, Pavitra explained how in most cases the interviewers are more concerned about the working experiences. So, don’t be surprised when the first thing the interviewer asks would be regarding your working experiences. In addition to this, Lim highly recommends furthering one’s studies after completing a diploma.

“The company’s headquarter is in Shanghai, China. And, that it is listed under Hong Kong & Shanghai Stock Exchange. COSCO is a fully owned subsidiary of COSCO SHIPPING Lines Co., Ltd. with its main office located in Bandar Sunway, Selangor, with branch offices in Penang, Johor, and Kuching. 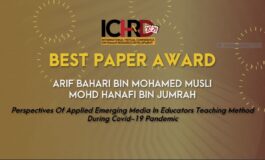 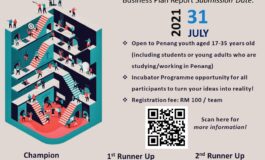 Opportunities to expand entrepreneurial and innovative skills through PYDC’s initiative 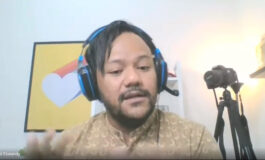 Being more than prepared in the creative industry