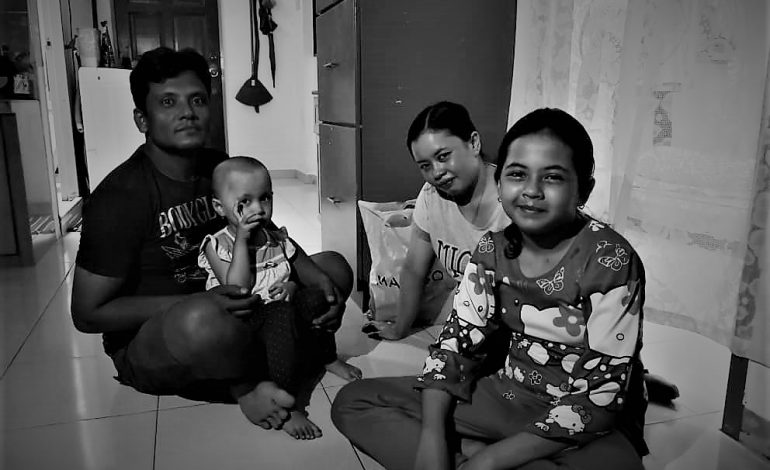 For 20 years, he lived in fear of being casually shot to death every single day. Born as a Rohingya in Myanmar, his existence as a human was denied and his identity card was not given to him.

Saiful, is a Rohingya refugee who currently lives in Malaysia. He escaped from his hellish hometown 19 years ago. Without an official record, Saiful loses even the most basic human rights; he has no idea what his actual age is. 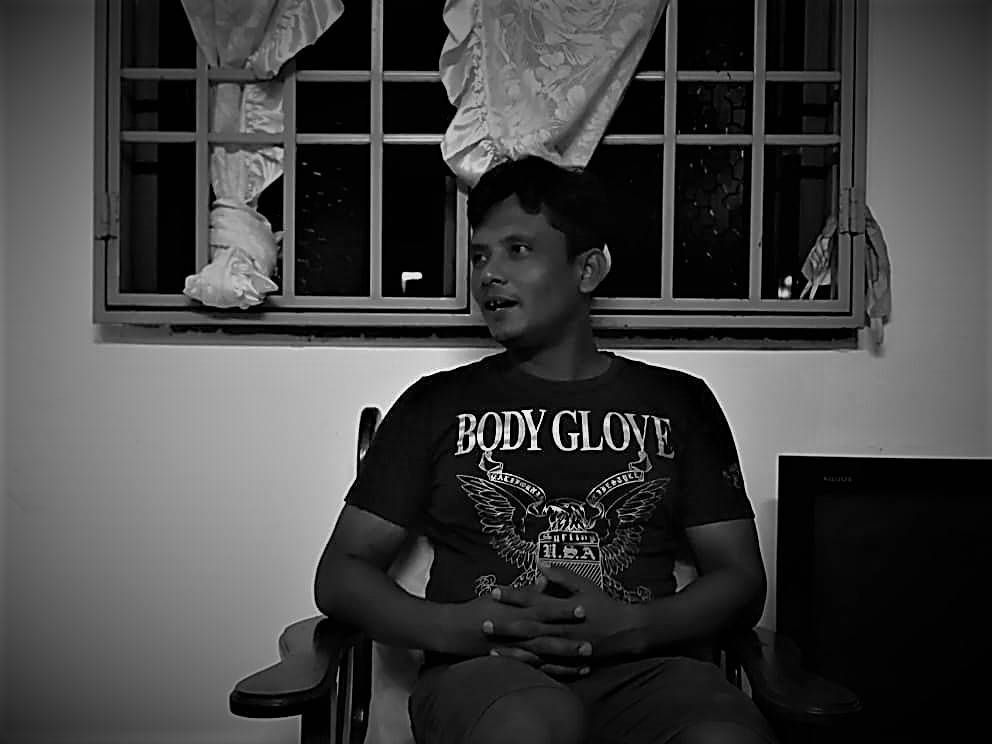 Saiful, who assumes himself to be around 40 years old, is more than happy to share his experiences in Myanmar.

“You will be angry if someone took your belongings without asking permission. Back in Myanmar, I feel that we have lost every right as a human being,” Saiful said.

They refer to the Buddhist nationalist groups, which their number could make up to tens of thousands in Myanmar. Boycotts and attacks on Muslim communities were regularly called by them.

The main reason that leads to the violent attacks is down to the groups’ different religion and ethnic identity.

Rohingya is a highly persecuted Muslim group with numbers over 1 million, their citizenships were denied among Myanmar’s 135 official ethnic groups since 1982.

The Rohingya crisis remains until today.

Saiful used to live with his very small family; his parents and one cousin. His cousin was a few years younger than him. He said she was once a talkative and cheerful girl.

“One day she just disappeared, and after a few days, we heard panic knocking on our door at night. She came back, with noticeable bruises covering her hands and legs,” Saiful said.

She never told them what happened. But it was obvious. She was raped.

He said his cousin became a quiet person after that; she never spoke a word about what she had been through, but all of them understood.

“We tried to fight back, but in the end we just got beaten up, it’s like adding insult to injury,” Saiful said.

He said Rohingyas live a hard life in Myanmar, especially men. Adult men are randomly “taken” and detained at stations.

These stations were overseen by the government soldiers. They are “jails” that keep hundreds of Rohingyas and allocate jobs to them, such as farming.

The men were forced to work without being paid and in return, they receive only a small amount of food. Most times, whatever little they earned, was not even enough to feed the family.

Saiful said there is no limitation of time on work per day. They need to work until the tasks are done.

He said he once worked for around 20 hours a day.

“If you don’t work, they shoot you. It’s only work or die,” Saiful said.

He added male Rohingyas could still manage to live in peace when they are young, but once they grow up, they become a threat. As a result, the security forces will shot them down merciless.

Angry with rage but too afraid 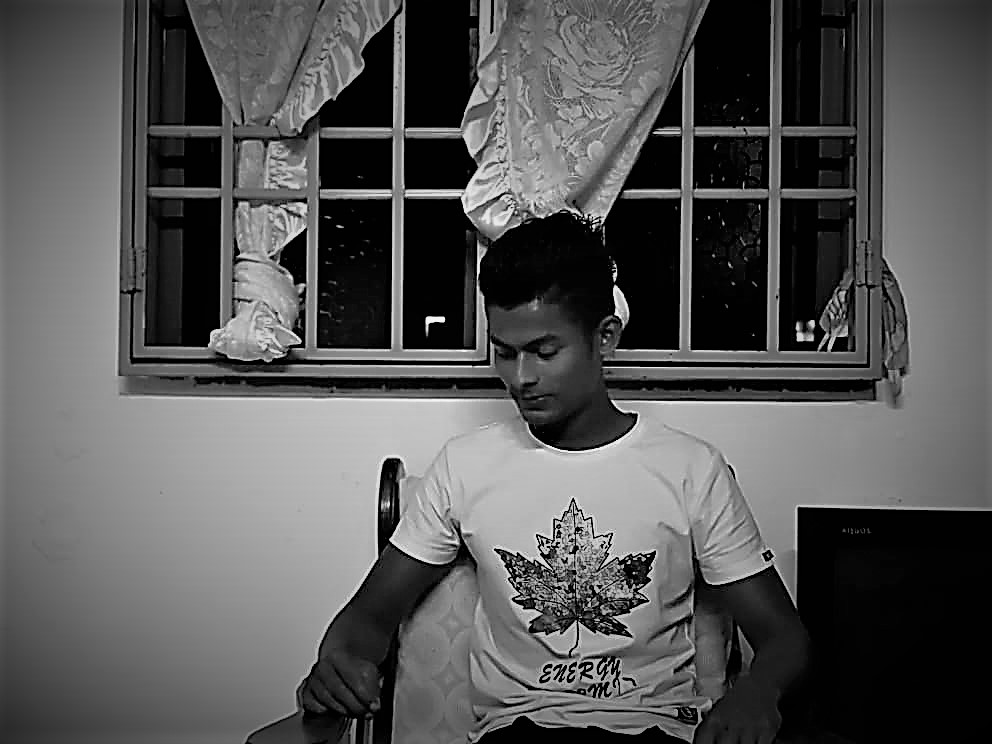 Abdullah struggles to hold his anger as he clenches his fists relieving the devastation of the burnt down village.

Abdullah, is a Rohingya refugee who has lived in Malaysia for six years. He escaped from Myanmar after his village was burned down to ashes by local Buddhists.

When he was around 13 or 14 years old, Abdullah lost his home and was separated from his family members. At present, he lives with his elder sister in Malaysia, while his parents live in Bangladesh. They have not been able to meet each other for 6 years.

“Everything happens in a flash, as I ran and turned around to look at our burning home, I can feel rage burning in my chest as well.

I’m furious at their behaviour, and also the fact that I’m too afraid to do anything,” Abdullah said.

His only option was to run, or being shot to death.

Just like Abdullah, Saiful describes this war between Rohingyas and locals with irritated emotion.

“Every time the fight between Muslims and Buddhists breaks out, the disaster becomes like a Tsunami, curling everyone into the waves,” Saiful said.

“Sometimes I don’t understand people who complain about small matters in life, because it’s hard enough for us to keep breathing,” Saiful said.

Saiful and Abdullah needed to move out from Mondhu and Maungdaw in Myanmar due to the difficult situation. As they thought they were finally leaving hell, a new challenge awaited them.

Saiful said they were smuggled into Malaysia with around 100 people on a fishing ship that could only ferry 20 people.

He said the ship was so narrow that they could only stand, squeezed next to each other. The ship had no food supply, the waves were huge and dangerous, and people could fall into the sea at any time.

“My friend fell from the ship. There isn’t anything we could do to help except from watching,” Abdullah said.

The journey took one month. 50% of them managed to reach Malaysia, while the other half died along the way.

Saiful added they needed to throw the dead people into the sea as the corpse stunk.

“The card change our situation, it grants us an identity,” Saiful and Abdullah said.

By taking the card, the refugees are under the protection of the United Nations High Commissioner for Refugees (UNHCR), the risks of them getting arrested are reduced. It is an identity document without any formal legal value in Malaysia.

According to statistics, 149,147 people are registered with UNHCR Malaysia at the end of August in 2017. Among the 89% Burmese registered, 41% of them are from ethnic Rohingya.

Saiful said during the initial years he lived in Malaysia, he needed to sneak out for work in the morning secretly, while at night, he slept in the mountains with other foreign workers. He did this because technically, he was living illegally in Malaysia.

He said that was a tough condition to undergo. He only earned RM30 a day, sometimes he only managed to find a job that lasted for 2 to 3 days a week, sometimes he couldn’t get a job for months.

Both of them got caught once during work, that was when they received their UNHCR card. Saiful received the card after 2 years he came to Malaysia while Abdullah received it after 3 years.

The card enables them to live freely in Malaysia, but they are not allowed to work for a salary.

Saiful said he understand the government’s concern on refugees taking advantage of the card to do inappropriate jobs, or robbing off Malaysians’ job opportunities. However, in order to survive, he needs to earn money.

“We need to pay for rent and food, how do we live if we are not working?” Saiful said.

Paid work may be illegal but there are employers who understand their situation and give them contract jobs. This limits their job opportunities. They cannot work in factories and they change work places frequently.

It does not help these refugees especially since there are cases where others possess fake cards. The only welfare UNHCR card provides for the refugees are medical fees and accident insurance. Saiful said they are not allowed to gain vehicles license, which makes travelling inconvenient and they could only walk to construction sites or get a lift from their bosses.

The light in life

Saiful is now settling in Penang with a new family. He said currently his biggest motivation in life is his family members.

He said life is now better, and he is earning around RM50 to RM60 per day. But they still face financial problems.

I hope she won’t end up having the same future as me,” Saiful said.

Saiful said the refugee cards they hold won’t allow his children to study in government schools. They find it hard to afford the international school fees.

“Even so, I still send my eldest daughter to school. Education is important, we know nothing but we only know how to work for food.

“The situation is still quite difficult and I could only send money every 3 or 4 months,” Abdullah said. 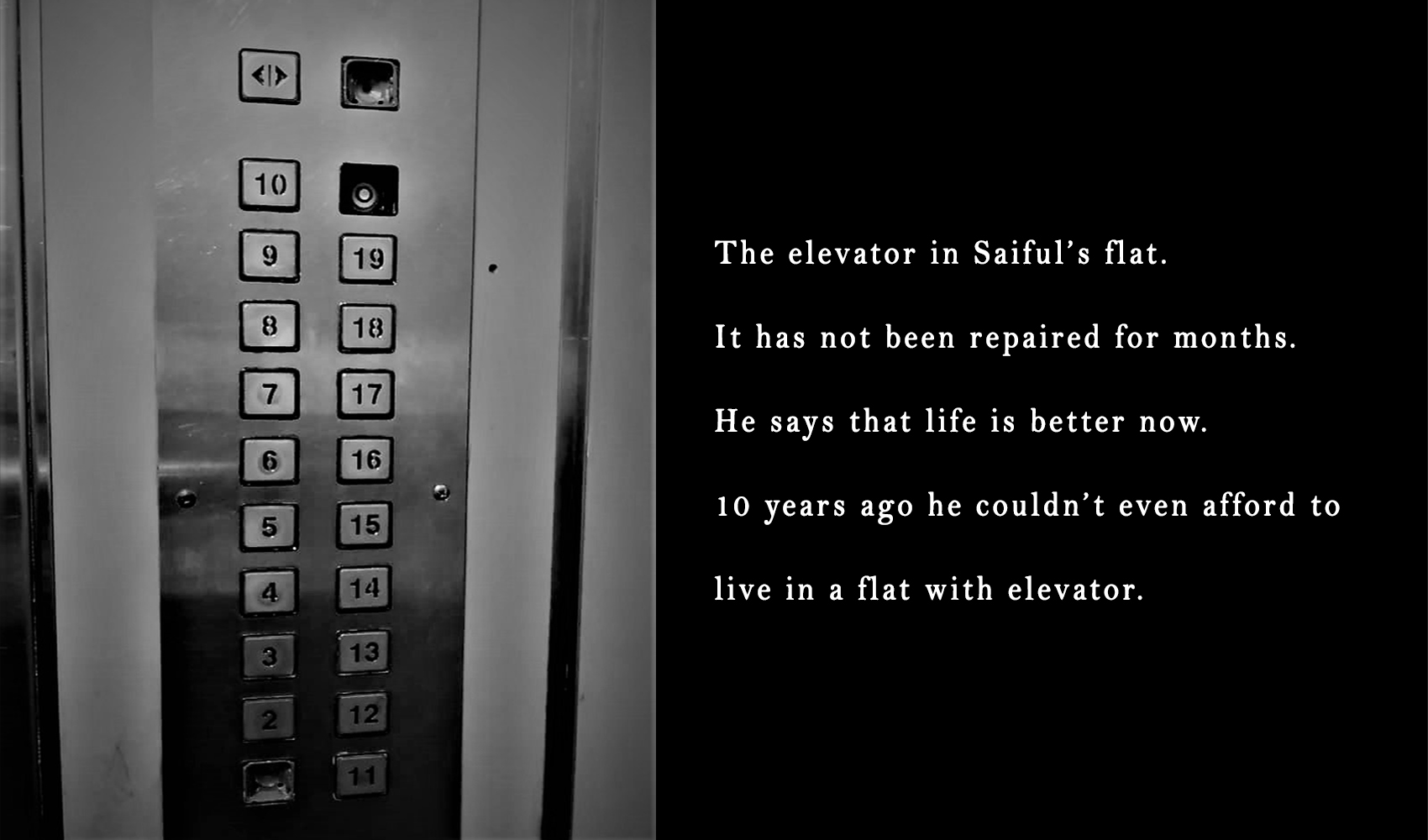 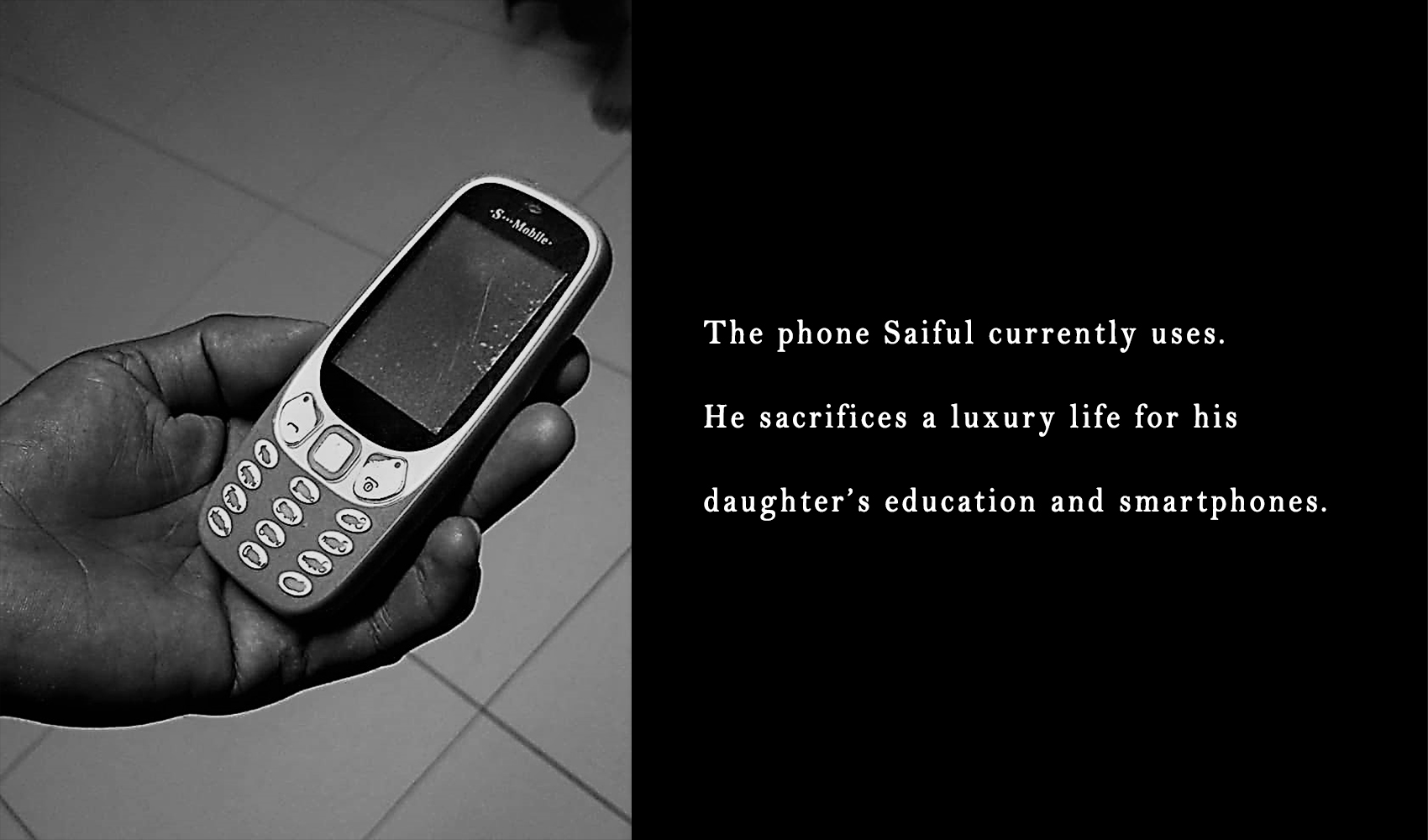 “The thing I’m really sorry about is I spend all the expenses on my daughter’s education and family here. I can’t even afford to send money back to my parents in Bangladesh,” Saiful added.

For Abdullah, he has always worked hard in order to send money to his parents in Bangladesh, although they have not met up until now.

Saiful said his greatest target in life now is to move to America with his family members. 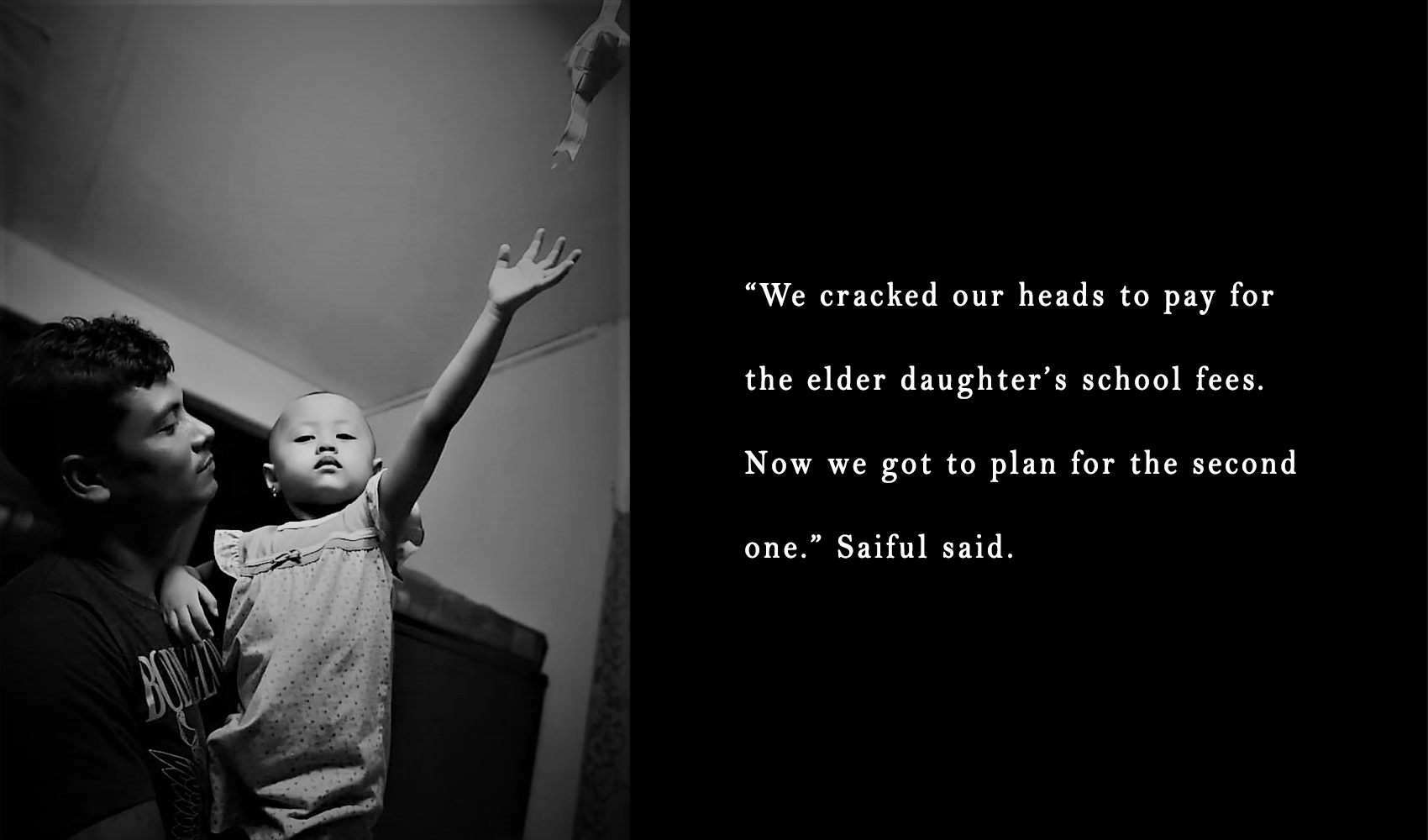 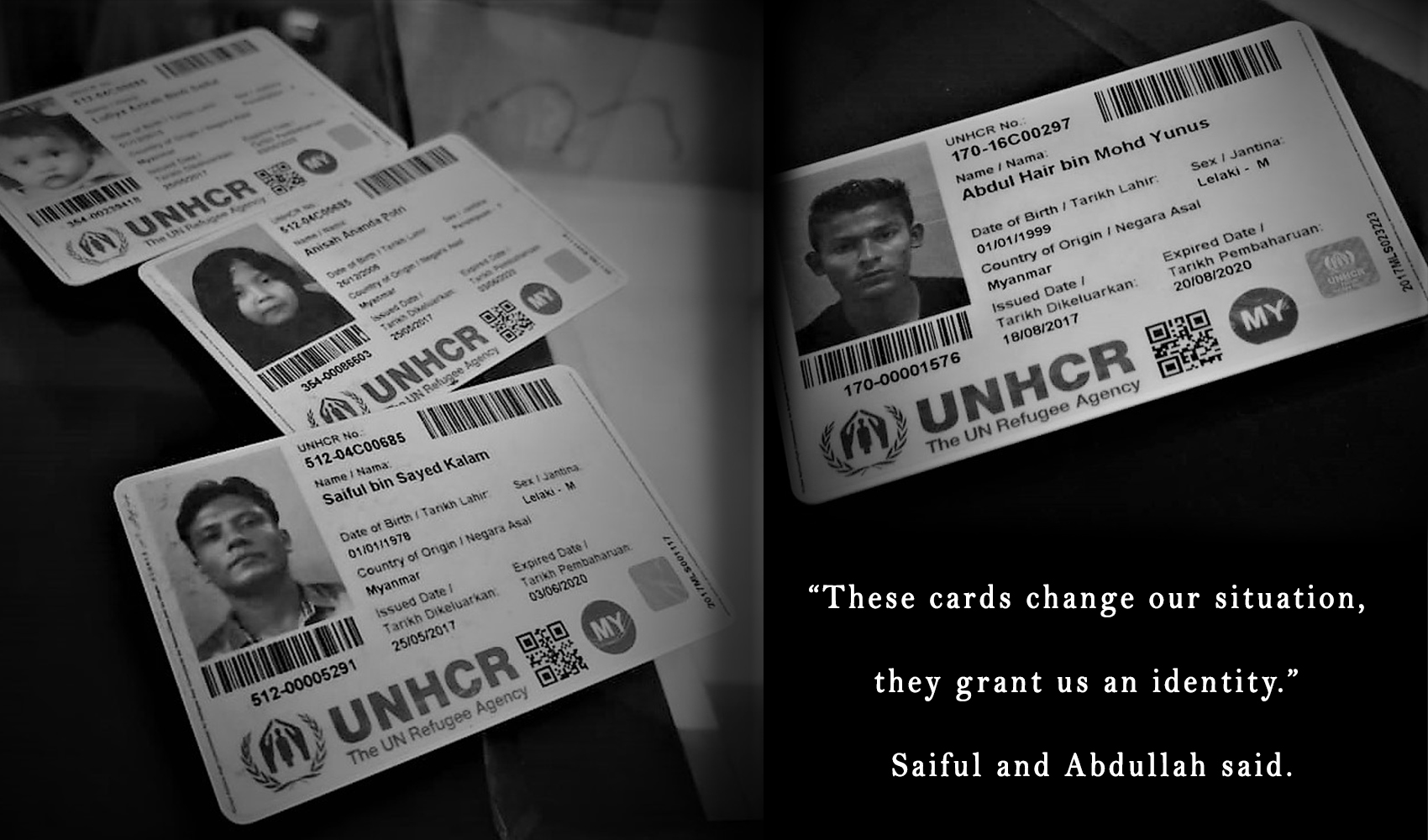 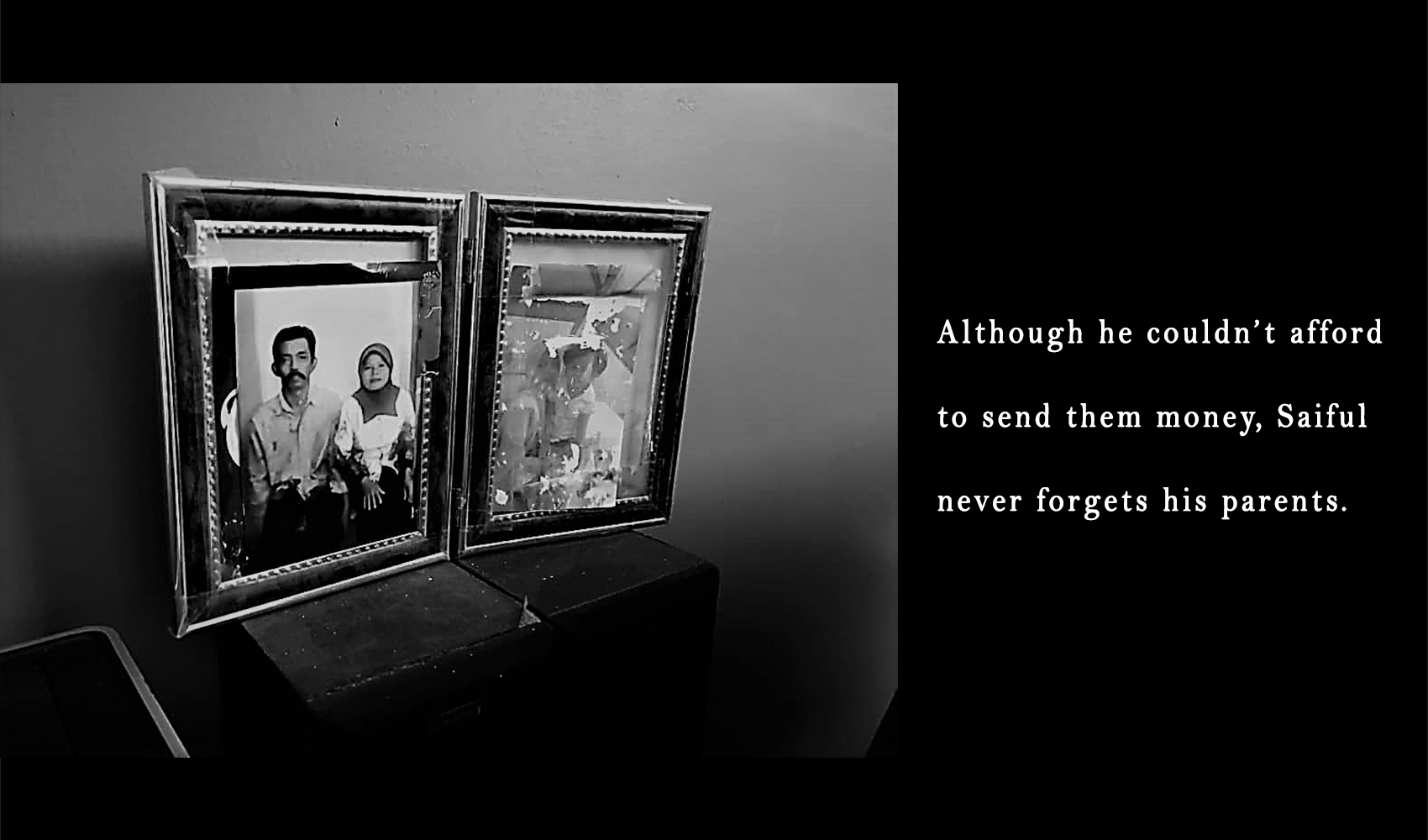 He said that every Rohingya refugee has this dream, which is to move to a country that could ensure them a better life.

The government will decide the refugees to send for other countries based on “lucky draw” among all refugees in Malaysia. Saiful said he received two phone calls but missed the chance, he believes there will be more chances in the future.

“I’ll be glad to live in Malaysia until die if the education fees are affordable.” Saiful said.

“We are just here to find food, because there is not enough to eat. We have no intention to find trouble,” Saiful said.